Anthology of comics by women from the Balkan countries with my comic contribution.. / Edited by Irene Jukić-Pranjić and Marko Sunjic / FIBRA Ltd.

LIST OF THE FEMALE COMIC AUTHORS IN THIS ANTHOLOGY:

the femicomix group exhibition is based on the idea that the future of comic form or media belongs to female comic creativity, as ivana armanini explained. komikaze, the webzine and magazine curated by armanini that is behind this exhibition, has been working for years to make this tendency on the comics scene, as well as the potential of women’s creativity, visible and accessible to a wider public. therefore, femicomix is giving us an overview of various authorial poetics, and is presenting women authors whose work we could previously follow through komikaze live and on large formats.
younger croatian (pipal, jurov, brnardić, balekić, janković, rica, armanini), regional (bogovac, tomšič, varl, woznicki) and international (meyer, baeza, broenner, bunjevac, piksa, ehrlemark) comic authors have been selected for the exhibition. together, they give a very interesting and complex picture of what alternative comic scene has to offer today. the panorama that femicomix provides is fragmentary; however, by taking a little bit of each comic author, the exhibition creates a coherent visual whole in which abstract outlines interact with scenes from everyday life, and black and white drawings meet expressive frames in high-contrast colors. visual expressions of the authors intertwine and complement each other, and this vivid interweaving breaks any monotony, making the eye wander from one frame to another, giving the impression that each work continues the story from the previous one.
for example, amanda baeza’s autofiction is completely complementary to petra brnardić’s, although the first realies on straight lines and the second uses collage. petra varl on the other hand is prone to irony, same as katie woznicki, although her drawing is minimalistic and katie’s colorful. all selected authors share the tendency of ironizing the comic form, and continually pushing it to its borders. therefore, they actually confirm the thesis of ivana armanini that the power of female authorial expression is the future of the comic media and the future of comic art itself. the authors whose work is presented by the exhibition are not afraid to experiment or to merge their inner expressions with abstract visual solutions.
but the most important thing is that with excellent comic panels and works, femicomix fights against the common prejudice that the comic form is primarily for men and their “adolescent” sensibility and upbringing. what this group exhibition exquisitely shows is that comics don’t discriminate on the basis of sex and gender and that young female authors supremely rule the form, that they perfectly control the media, and that they transmit elaborated artistic visions, to the envy of many. 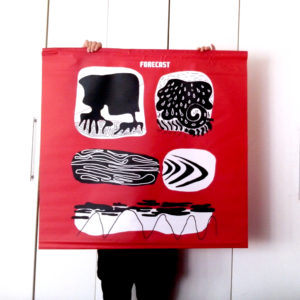